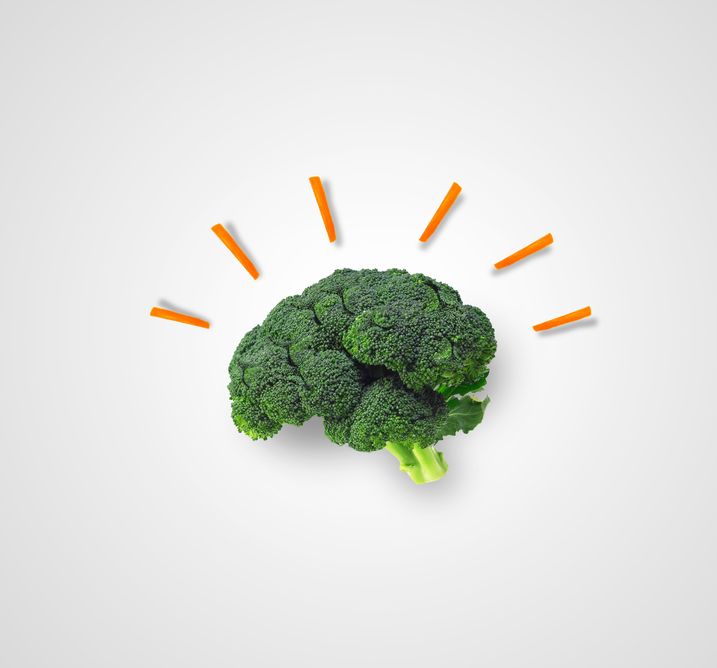 In the 1990’s, researchers released a small study which found that when adults listen to the music of the 18th century classical genius Wolfgang Amadeus Mozart they perform better on intelligence tests. Numerous studies have been done since to found foods that increase the intelligence as Mozart music does. Here are 14 most powerful foods that put your brain at the top of its game.

1. Oily fish (wild salmon, mackerel, sardines)
More than half of brain mass is made up of lipids, and over 65% of these are fatty acids that belong to the well-known Omega family. These fats are vital to the production and development of brain cells, maintaining the fluidity of cell membrane. They also play a huge role in neuron activity. Oil-rich fish like wild salmon, fresh tuna and sardines contain Omega 3 fats that help your brain cells interrelation to each other. As a rule, try to eat at least two portions of oil-rich fish a week. Note: while fresh fish contains Omega 3 fatties, tinned one does not. In addition, fish contains phosphorus and iodine– both important elements for brain work.

The American and Australian scientists measured I.Q. of 972 volunteers and came to a conclusion that those participants of experiment, who daily used dairy products, were tested on logical thinking and memory much more successfully, than those who neglected yogurts and cheese. Fatty dairy products are especially useful as our brain more than half consists of fat. The lack of crucial fats can become the reason of various unpleasant diseases, for example multiple sclerosis. What is more, protein, calcium, vitamin D and magnesium found in dairy products, play important role in stimulation of brain activity.

The brain accounts for around 25% of the body’s oxygen needs. Iron is required to get oxygen to the brain by means of the blood’s hemoglobin. Liver is one of the diet’s assets guaranteed to contain this metal. Additionally, liver is one of the most important sources of Vitamin B. Since the mid 1990s, it has been known that these vitamins, mainly B1, B6, B9 and B12, improve cognitive function and the results of intelligence tests.

Fiber-rich whole grains are an integral part of the Mediterranean diet. It is also loaded with vegetables, fruits, seeds and nuts, wine and olive oil. Resent research shows that this diet may be linked to lower risk of the mild cognitive impairment that can progress to degenerative diseases. Generally people do not eat nutrients or foods in isolation; they eat in combination with other foods so there is value in dietary patterns. This type of diet can reduce oxidative stress, inflammation and other vascular risk factors such as high blood pressure. All of that may have a role in increasing risk for brain malfunction and diseases. Since the body breaks down the carbohydrates in whole-grain oats very slowly, they help to keep you sharp for long hours.

A study published in 2011 found that females with healthy iron levels performed better on mental tasks and completed them faster than those with low iron status. This metal helps transport oxygen throughout the body and to the brain. In order to enjoy beef with a clear morality, splurge on healthier grass-fed cuts. To work at its best, your brain needs a conformable supply of oxygen. A lack of iron in the diet can reduce ability of blood to carry oxygen, decreasing the amount delivered to your brain. Not taking in enough iron can also cause problems such as lack of energy, poor concentration and tiredness. Low-fat meat is an excellent source of iron. It contains iron and zinc which are important minerals for cognitive function of the brain. These elements participate in mitosis of brain cells and in reactions of DNA synthesis.

A good vegetarian source of iron is egg yolk. Eggs contain phospholipids and lecithin, integral to build up membrane of brain cell. In terms of boosting intellect, their value lies mainly in their proteins. Long used as points of reference when analyzing the quality of other dietary proteins, eggs are actually rich in amino acids, vital in the production of the principal neurotransmitters. A synthesis made from serine and methionine are used in the process of memorization, where noradrenalin, stimulating learning, and its production rely on the presence of tyrosine and phenylalanine, which are again found in eggs’ proteins.

There’s science to back up your mom’s advice to eat your spinach. Studies show that people who take in more vitamin C perform better in tests for attention, recall and memory. Experts suggest eating at least 5 portions of vegetables and/or fruit a day, but the key is to eat a variety. When picking veggies, go for a rainbow colors, not only because they look great, but because this is a proof to the beneficial nutrients they have inside. All leafy vegetables share richness in Vitamin B9 or folates, which is thought to play an active role in the development of a fetus’ nervous tissue and also in the renewal of blood cells. If spinach is not to your taste, go for lamb’s lettuce, watercress, broccoli, iceberg lettuce or different types of herbs. Among these veggies rosemary is worth noting as it has certain flavonoids notably apigenin in its aroma that has stimulating properties affecting memory and concentration through encouraging cerebral blood flow.